Maricopa County – Nation’s highest growth for three consecutive years … where are the people going to live?

You can’t buy or rent what’s not on-market

Net in-migration is facing a low homes inventory in metro-Phoenix, both new and resale homes.

Accoring to the national Census Bureau, Maricopa County has had the highest growth in population, actual number of people living here, consistently every month from January 2016. The reported increase was 81,244 between July 2017 and July 2018. Note that this is the “net” gain … the difference between those arriving and those leaving.

At an average of three people per living unit, the number of new housing units needed for new arrivals in 2019 is on the order of 27,000.

This a rather shocking number for the construction of new homes of some variety for one year, even considering that the metro area is about 80 x 60 miles east-west/north-south with a population approaching 5 million.

A big problem … new construction of single-family units is near the low point for the last two decades. 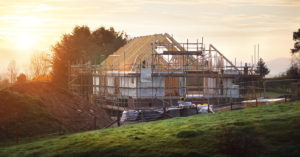 A fundamental problem to any substantial increase in the construction rate is the absence of skilled construction workers. A great many went to other forms of employment in the face of the housing recession and have not come back.

On the order of 10,000 multi-housing units, apartments, are being built in Maricopa County in 2019. This is comparable to the construction rate in 1995 through 2001. It’s been a roller-coaster trend in more recent years.

The construction rates for both single and multi-family units are increasing, but so is the arrival rate, particularly from California.

Much has been made in industry literature that homeowners are selling and moving less frequently. In the chart below, tenure is the bar-chart with the scale on the left. Average tenure nationally has grown from about 4.5 years in 2000 to 11+ years in the first half of 2019, with an increasing growth rate. 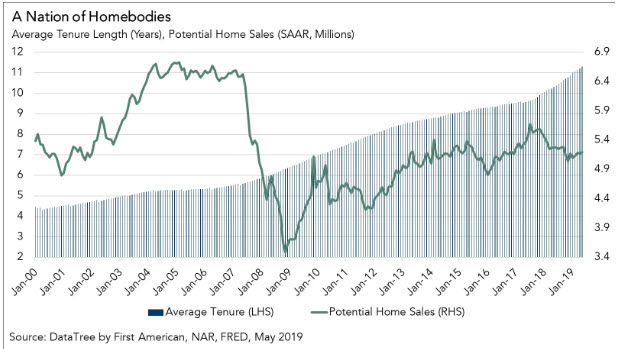 The effect of higer tenure will be to decrease the number of resale homes available.

For metro-Phoenix and supply verses demand, ultimately prices, this aspect is a largely “zero-sum” effect. The majority of people here that are selling would also be buying here to size down, up, or for specific location issues.

But all the other factors are producing a low housing inventory in metro-Phoenix. And we all know “the law of supply and demand”.

The average metro-Phoenix home sale price increased 5.1%, median price 4.4%, from June of last year, as illustrated by the chart below taken from the monthly ARMLS report.

These are the highest prices EVER for metro-Phoenix.